SECRET OF CETINA, Omis: a place to discover

I have to make a premise:  this piece was written about 20 years ago. It got lost in the shuffle, and never digitally stored. So it was unpublished until now. I had forgotten about it until a few months ago, and it wasn't part of my book.

20 years is a long time, today, with regard to both technology and climbing development.  Many, many things have changed. But the reader of this short story shouldn't focus his attention on the technical changes in mountaineering or in climbing. You could read about such technical changes in plenty of other accounts. The reader should focus his attention on the historical setting, instead.

In 1996, when we began to go back to Croazia again, that country was coming out of 5 years of war.  The traces of the war were in people's eyes, in the empty supermarket shelves, in the homes destroyed; it were in the minefields, that had been off-limits for plenty of years, after the war. The war almost didn't show up at the coast: it was fought in the surrounding mountains, nearby. Neverthless, seeing someone who comes to climb, for the inhabitants, was like seeing the return to normal life… now, fortunately, things are different. Croazia is a European country, and probably, nobody brings  a round's chambered AK47 in the trunk of his car… Now Croazia is waiting to join the European Union. But in 1996, instead, a time of hate and death had just ended. Get back to climbing was like reverting to life, and many survivors were trying to find peace with themselves climbing the rock walls of Omis.

To Carlo, with whom I shared that colored holds and a piece of my life, and that is waiting for us someplace else.

SECRET OF CETINA, Omis: a place to discover 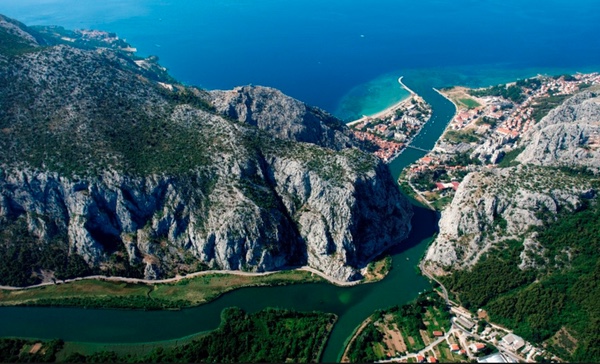 Red and black stones set in a grey rock wall. Everything is small, everything seems delicate.

A precarious game of balance, where strength may be useless, where precision, determination, and self-confidence (since the bolts are decidedly spaced, Austrian Style) are needed to climb. A multipitches route with colorful holds, that could drive mad with joy more than a few climbing wall lovers, often struggling with the real monochrome rock walls.

The Cetina river quietly meanders to the sea, beneath us, slowly unveiling its secret. In this journey to the South, we are searching for new rocks, new routes, scents and sensations, new people and environments. 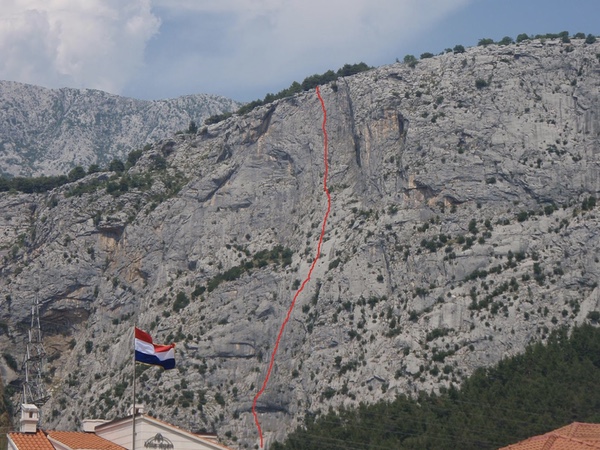 Omis, a world apart. Beaches and walls of rock, intact cliffs of perfect limestone. Open water to swim, a river that cools the hot summers.

The "legendary" Vincenco will guide us through the large and small walls of this limestone world. Intact rock walls a few minutes from the car. Local climbers enthusiastic about people interested in their world. A small paradise for the sport climbing of the future. 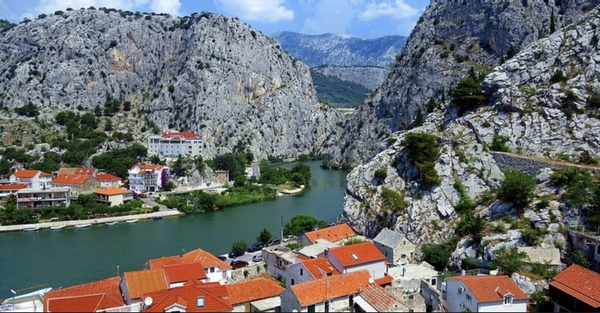 Climbing in Croazia engenders a sense of adventure, a sense of freedom, that puts a value on the trip.

The return to work gives us a dawn with the snowcapped Alpago illuminated by the rising sun. The transition from the mild Mediterranean climate to the snow of the Alps makes rough the turn of the season.

Never despair. It's November, the skiing season is beginning.