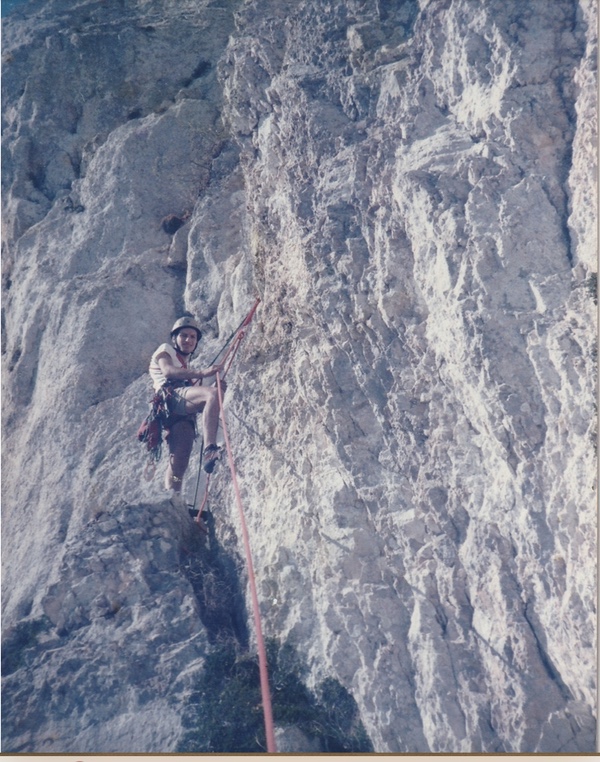 So you, starting from an intuitive dimension, naive and a little artisan, became competent. And many of us became skilled route setters, isn't it?

Eh, it was a necessity for us.

In my opinion, this change made us less competent, in a certain sense. Before this change we were so experimental, we were used to doing a lot of tests. Then someone at the top told us how we have to do things, taking responsibilities away from us. Searching for the difficulty we got hypocritical blinkers on.

Our relationships got ruined and with them our lives. Only at a certain age, we realized that our lives would have been very different. We have been lacking a critical conscience. We should have taken everything with a major grain of salt.

You often talked about ethical issues.  Doesn't it conflict with the anarchist spirit of climbing in that period?

We weren't anarchists, or at least not all. From the stories, it could look like this, but it was not true. We have received a quite strict family upbringing, related to respect, sharing and even to obedience. We always followed some leader, for better or for worse. Then the leaders have increased in number until we have all become a leader.

It seems right to me to have shared rules to protect the environment, the safety, the territory, the rock, and also the climbing discipline. There must be a limit that can't be crossed.

Speaking of aesthetic, was (in a certain sense) poetic what you were doing?

Regarding the romantic aspects of climbing, I've never got the top of a mountain. I've never touched a crux on the top. That's because my companions said that we must never get to the top. Because when you geto to the top, then you must go down, and going down is sad.  If we didn't get to the top, we never should go down.

There is no need to be romantic in a situation where it's allowed. With a bucolic landscape, with the mountains at sunset it's easy to be romantic. It's needed to be romantic, instead, in the middle of a landfill, among the mountains...  The most romantic aspect of mountaineering, for me, is in sharing experiences with the companion. It's rather a love affair, not Romanticism.

I lived the period in which the only objective was increasing strength to increase the difficulty. And this is not my idea of climbing. Maybe this my romantic point of view of climbing. If you have the grace of giving up on an ascent because you know that you can't afford the ascent the way that you would like, you are in a state of equilibrium with the rock climbing.

In my opinion upgrading strength is very easy, whereas being beautiful and good is not for everyone. 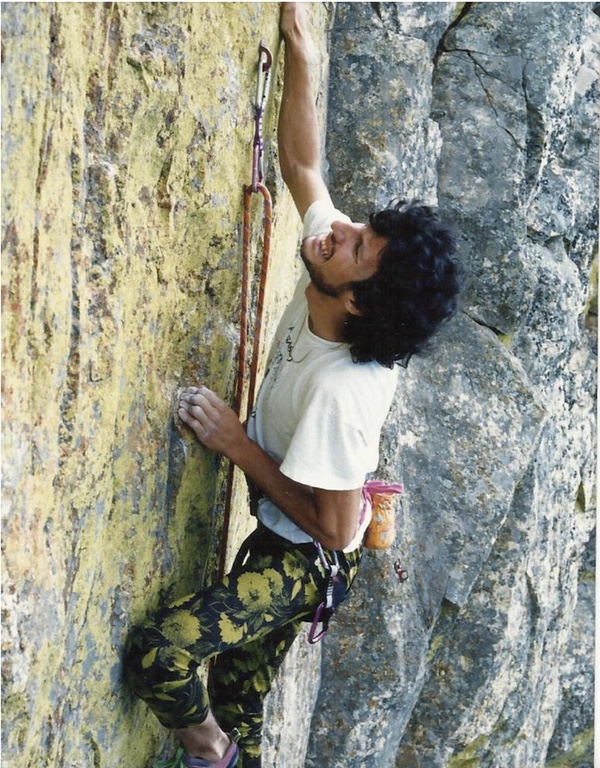 Can you tell us a story about the eighties?

We were used to saying «Blocca Baiò!» [Block, Baiò!, nde], over and over again. This made us laugh, even if we didn't know what that meant. It was some kind of insult to everything around us.

We were doing many jokes. At that time we had already crossed the idea of being always in competition, somehow. We weren't thinking about reaching who knows what level anymore. Thus we tried in every way to create goliardic situations, to have fun at someone's expense. Once we set up on the rock wall a cardboard hanger, another time we set up a plastic chain at the top of a route. Sometimes we put some snakes into the buckets and many other jokes...

It was a way to keep our minds off the frenzy of the difficulty, off the grade's bugbear.

It was nonstop fun and even pressure, while we are trying to find ourselves, to find a job...

We were isolated in our small town, and this condition become hard to bear. At that time, unlike now, nobody wanted to climb and if your companion got out from the game, you were alone.

How do you live the boom of the indoor climbing walls?

I mean: you go to the gym also to make friends. But making friends in a climbing wall it is still hard. Training is always the only important thing.

But how to think about an educational structure, about a recreation facility, when the most important thing is make cash?

All that comes from a need of mine. I found myself living in a territory where nothing had been done for climbing. Thus I began to set climbing routes not by choice, but by necessity. Anyway, even if compelled, I must say that I ended up doing something I like very much. I can really say that a great passion has grown up around it. passion, not work, I would like to stress this.

I think that knowledge is needed in everything that is done for passion. An increasingly deeper knowledge, indeed.  Route setting, for me, was a real compulsion, as climbing. During certain periods I felt useless when I wasn't setting some routes. I think it depends on my upbringing: I feel a strong desire to do something for others, which may be useful, but also deeply wrong.  Because when you think you are doing something useful for others, you expect others to do something useful for you. But this is an absurd wish.

Even though they say I'm a skilled route setter, I think I know very little about the art of establishing climbing routes. Of course, I know the basics and I've formed an opinion about the real benefits of the last innovations.

Regarding the ethic, I think many route setters never had one. Ethic makes you choose not to do something. Every course on the route setting should introduce the concept of the importance of choosing, and I'm not talking about the choice of materials!

Another important thing: the new lines shouldn't be too close to the other. Each line must have its own identity and its own name. When a new line is formed in my head, I think also of its name. But sometimes I'd rather not share its name with people who wouldn't understand.

You say you are not alpinist but apenninist [Apennines are the mountain chain of Central-Southern Italy, nde]. Tell us what is the "Apenninismo"?

It bothers me, indeed. In the Apennines you can always change your plans, change your mind. They are not an enclosed space, where you can think almost about all, unlike the Alps. I still don't understand how Hannibal was able to cross the Alps with elephants... He could be used some secret underground, or boh! [he laughs]

Tell us about your experience in Castelnuovo al Volturno, in Molise.

Before establishing a new climbing area, I must fall in love with that place. For example as soon I saw the rock wall of Pablo, in Palermo, I fell in love. Then I went back to see it many times before starting to establish a climbing area right there. My history with Castelnuovo al Volturno was different: in Castelnuovo al Volturno I found a place where realize my ideas. For twenty years I felt the need to know if what I was doing was important. Then we created in Castelnuovo al Volturno the association Innaturawith enthusiasm and interest.  But then we had a lot of troubles, especially in our interpersonal relationships. Nobody accepr rules, but it's impossible to create something without rules.  We wanted Castelnuovo al Volturno to be an amazing place, where everything was human-sized. Now that enthusiasm is waning. My ideas have not been realized. Neverthelessand this was a success.

Finally, what is the future of climbing?

As regards the discipline of climbing, I think that it's ending. It started many years ago, it peaked, and now it is going toward the end. But I may be mistaken.

As regards the last sentence, as during the eighties, it must be "Blocca Baiò!".

And now, what are you doing with this stuff? Are you selling it to the KGB?

Published with the kind permission of the magazine Alpinismi, which owns all rights, and which we thank.