Face to face with the clairvoyant redneck.

I'm afraid he won't like that, but when I think of Andrea Imbrosciano, the first words that come to my mind is a heretic. Not as a heretic as Fra' Dolcino or Thomas More, but etymologically speaking,  heretic as those who make a choice; Imbrosciano, indeed, is really someone who has made some choices (and sometimes even to make himself misunderstood).

He came from Sora, a not so small town in the province of Frosinone, long ago, since dinosaurs roamed the planet,  and right away he started to get up to all sort of things, from the Dolomites to the Gran Sasso Mountains, from the Mediterranean islands up to the perfidious Albion. He climbed through the charming horror of the Eighties&Nineties irrigating (with a lot of wine) and cultivating his corrosive critical thinking.

Published with the kind permission of the magazine Alpinismi, which owns all rights, and which we thank. 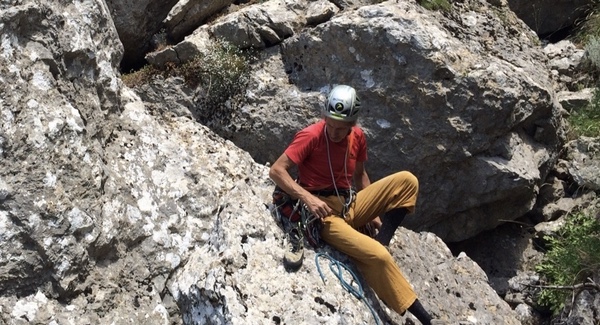 Andrea Imbrosciano went all over the world impassioning himself about good climbing and about better bolting (he indeed is a co-author of the climbing spots regulation commissioned by the Italian climbing associations). In short, over thirty years of mountaineering, maybe even if reluctantly, he has become a sort of spiritual leader with regard to rocks, smearing, and vertical bureaucracy.

Dental technician and prosthetist by profession, responsible for sports technician training Uisp Lega Montagna for the love of humanity, he for more than 12 years has carried out a country planning project for the development of the Alto Volturno land, through outdoor activities, with the Innatura asd association, quixotically pursuing his last utopia.

I've been meeting him a warm morning in June, at Orco, in the B&B Bed and Climb of Paola and Mauro. He was most of the time lying on the couch, carelessly playing with a   Rubik’s cube.

…. but how are long those questions?

Well, then we need some wine!

Well Andrea, let's start. You are a kind of dinosaur: how was climbing in Central Italy during the far '80s? How did you start your games?

It's not easy for me because now I'd like to forget the past, to alleviate the difficulty of living the present.

In those days it was just like that: we were doing things without worrying about anything. No doubt, ethic was the greatest issue. But at that time even ethic depended on the moment of change that we were living.

We were trying to do something the other did not. In my town was the only practiced sport was football.

It was surely a world to discover, with rules, lies, falseness, cheating. But none of us was wondering about anything: we were used to performing without thinking. 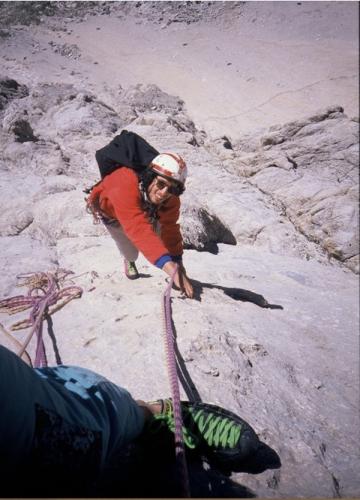 How did you start climbing?

As a boy I lived in a mountain place - even if my friends in the North say that it's "all round". I was used to doing hiking or simply outdoor activities. Also, I was in Boy Scouts, and so it came to me the desire. That's all: as a boys we climbed the mountains around our town.

One day, a friend of mine, Fabrizio, wha had a house in Selva Nevea (in the province of Udine, that is in he Norther Italy nde), began to tell me: «eh, I every year go there and see people climbing the rock walls!». Then we too started looking at the vertical aspect. We started to climb, using real primitive tools. The harnesses were made with damper tapes, the rope was bought in a hardware store... Because we were self-taught. Even if in Sora there was a  headquarter of the Italian Alpin Club since 1929, we didn't know no one of its fellows.  So we didn’t have any teacher.

Fabrizio now is a General of the Financial Police, but at that time he played basketball, and so was I. He got sick of basketball, and got it into his head climbing. Having house near the Alps, often i went there to climb. Then we started to do the things that we had read in the book My mountains Montagne by Walter Bonatti.

So, you started to climb after reading Bonatti.

Yes. One year my brother, searching for my birthday gift, found this book at a stand. I felt like I'm holding an amazing thing... I read the book without even knowing where the places described were.

That was the start, for me. I started to climb mountains with Fabrizio, and gradually we scheduled our activities to repeat the same things that Bonatti described in his book. 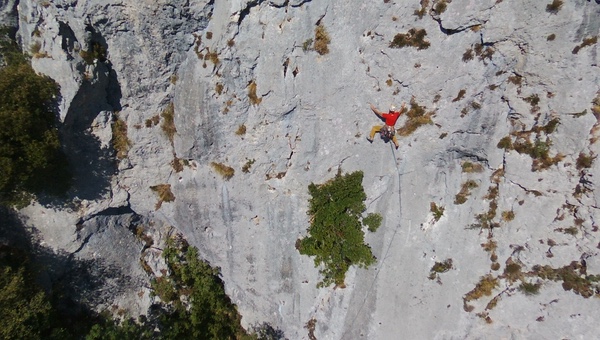 Knowing you, it's so strange thinking of you being inspired by Bonatti…

In a certain sense, yes. We built our personal, unattinable Pantheon, also because at that time we can't afford long trips and travel expenses to compare our selves with our own mythes.

On second thought, our greatest drawback, for us small town boys was the lack of comparison. For a long time, we did not desire head out our land to see waht other were doing. We wanted to belong to a group, and this attitude was not very fruitful, and even created several difficulties.

We were always near the small town of Sora, setting almost each day new routes. We not really understand what we are doing, but we were having a lot of fun.

Just out of school, we went there. Such mountain is Colle San Casto, and it's in the middle of our town. It's a world apart: there is a castle, a ruined village, pebbly roads, steep paths, rocks, trees... It was our personal Pantheon, where outsiders were hardly tolerated. Eh, at that time we were shy and used to avoid confrontation.

The romantic mood wasn't for us. Every time we went on the Alps, we couldn't feel romance: we struggled a lot. Many hours by train, and, once there, often we were badly treated. We were not poor. but not even good at managing our holiday budget for three months. So, in early August our resources were already exhausted. Then, with time, we we've made some friends in the Norther Italy, and er found ourselves better.