Ermanno Busetti presents us one of the less crowded areas between Sperlonga and Gaeta: Eldorado, in the rightmost part of Monte Moneta. 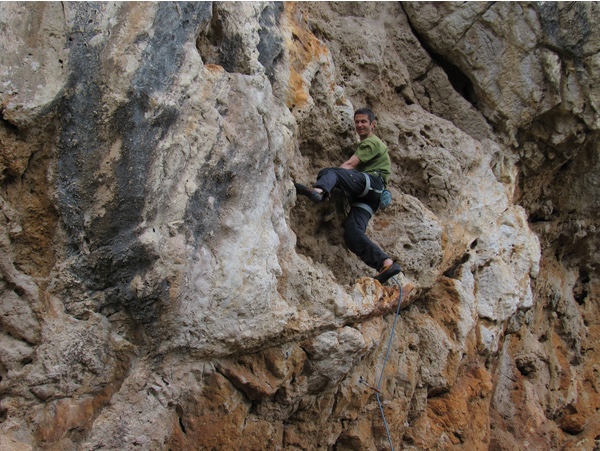 Eldorado is one of the later areas of some importance which were established in the zone between  Sperlonga and Mount Moneta.

I remember the day of its inauguration, in mid-april 2007. That day I got there late due to a car trouble, and once at the Avancorpo di Sinistra area [the first climbing area you find on the Moneta Mount, coming from the parking spot, 15 minutes from Eldorado, n.d.t.] it started raining heavily. We could see in the distance a considerable crowd of climbers huddled under shelter of the overhangs. Maybe that day few people climbed in Eldorado, but, judging by the smoke rising from the base of the walls, the barbecue grills performed at full capacity, and I guess there was no lack of sausices, pork chops and wine.  That day, based on certainly not wise reasoning, me and my group decided to go down, back to the cars, and then end the climbing day in a sad "Grottone dell'Arenauta" [A big cave on the beach, 3 Km further,  n.d.t.]. 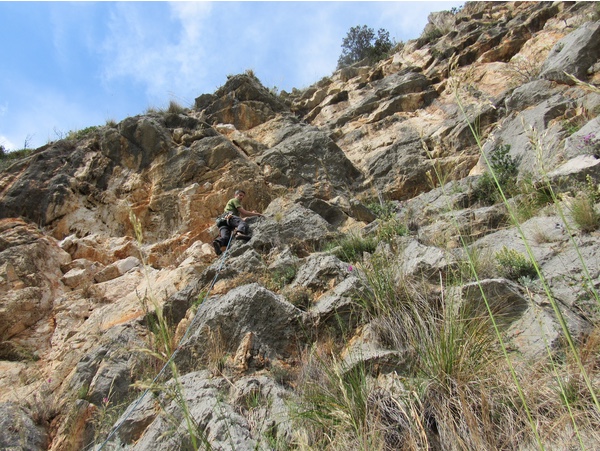 Coming back to speak about the Eldorado crag, it's the rocky structure you come across, continuning for a few hundred meters past the "Parete delle Meraviglie" area, heading South East, along a path that is not clear in the first part. It has 30 routes, mainly of "6" grade in the French climbing scale, but there are also few "5" grades, for those who prefer a more soft warming up. The higher part of the rock wall (the rightmost one) is more weathered and offers the routes of easy/medium level, even if with some overhanging sections.  Further down there is an overhanging stretch, where the rock is variously jugged, and where are the three 7a grades, representing the maximum level of this area. Maybe the limestone doesn't reach the quality of the celebrated climbing area surrounding areas, but the good holds and the excellent grip guarantee a satisfying climb.

The quality of the rock gets a bit lower in the leftmost part, where the vegetation and the presence of protrusions and fragile flakes makes climbing more cautious. 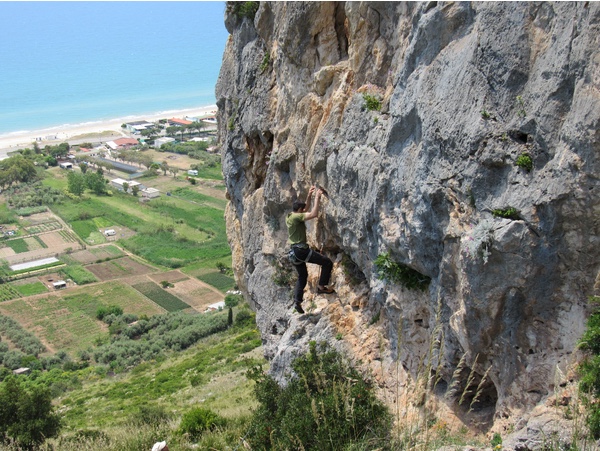 Among the many routes, all of high quality, I would point out the overhanging arête of "Eldorado" 7a , the good but spaced holds of  "Yuma" 6b , and the crisp water erosion pockets of "Rio bravo" 6a+.

Being East faced, the wall goes in shadow during the afternoon, thus this area is good for climbing in mid-seasons, whereas in winter during the cloudy days the almost ever-present wind could make climbing unpleasant.

Finally, the cliff has a steep base, that is not much comfortable, but allows you to take nice pictures of the rock wall, with the sea in the background.